After a flurry of more than 180 bids in the final hour, a JPG file made by Mike Winkelmann, the digital artist known as Beeple, was sold on Thursday by Christie’s in an online auction for $69.3 million with fees. The price was a new high for an artwork that exists only digitally, beating auction records for physical paintings by museum-valorized greats like Eugene Delacroix, Marcel Duchamp and Francisco Goya. Bidding at the two-week Beeple sale, consisting of just one lot, began at $100.

With seconds remaining, the work was set to sell for less than $30 million, but a last-moment cascade of bids prompted a two-minute extension of the auction and pushed the final price over $60 million. Christie’s said in a statement that 33 active bidders had contested the work, adding that the result was the third-highest auction price achieved for a living artist, after Jeff Koons and David Hockney.

Billed by the auction house as “a unique work in the history of digital art,” “Everydays — The First 5000 Days” is a collage of all the images that Beeple has been posting online each day since 2007. The artist, who has collaborated with Louis Vuitton and pop stars like Justin Bieber and Katy Perry, uses software to create an irreverent visual commentary on 21st century life.

Beeple’s collaged JPG was made, or “minted,” in February as a “nonfungible token,” or NFT. A secure network of computer systems that records the sale on a digital ledger, known as a blockchain, gives buyers proof of authenticity and ownership. Most pay with the Ethereum cryptocurrency. “Everydays” was the first NFT sold by Christie’s, and it offered to accept payment in Ethereum, another first for the 255-year-old auction house.

Todd Levin, a New York art adviser who saw Leonardo’s “Salvator Mundi” sell at Christie’s for $450.3 million in 2017, said he had “mixed emotions” about the Beeple sale.

“On the one hand, it’s super exciting to witness a historical inflection point,” Levin said. “On the other hand, the amount of money involved could skew and damage a nascent emerging market.” 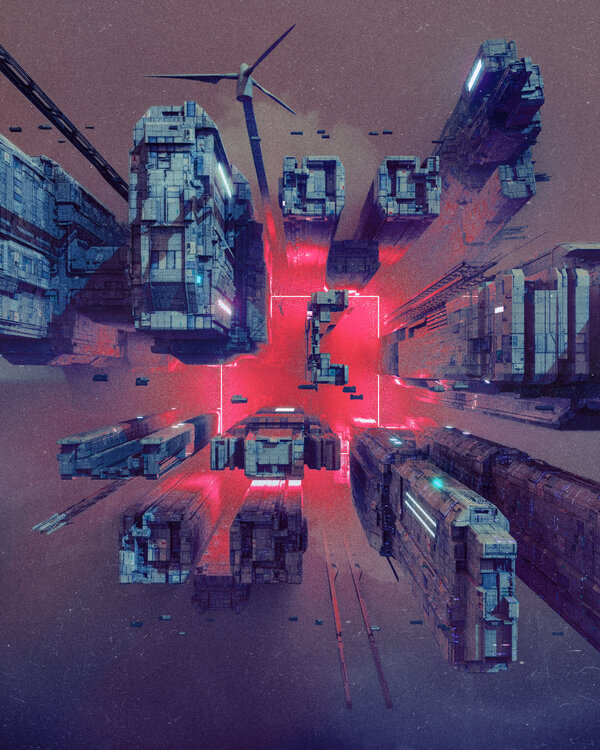 Christie’s record-breaking auction was held at a moment when the mainstream art world has become transfixed by the fast-moving, speculative market for NFTs, which have recently achieved exceptional prices on specialist websites like Open Sea, Nifty Gateway, Super Rare and Makers Place.

Last month, buoyed by a $1.5 billion Bitcoin investment from Tesla, the electric-car company run by Elon Musk, and support from major institutional investors including hedge funds, the total value of cryptocurrencies hit a high of more than $1 trillion. The value of crypto-traded NFT art also soared, setting prices that are out of kilter with the rest of the art market.

Another Beeple piece, “Crossroads” — a 10-second video NFT showing animated pedestrians walking past a giant, naked likeness of Donald J. Trump, collapsed on the ground and covered in graffiti — sold for $6.6 million in Ether on Nifty Gateway. The seller was Miami-based art collector Pablo Rodriguez-Fraile, who had brought the piece in October for about $67,000, according to Reuters.

NFTs have also become a medium of choice for new performance artists. On Sunday, Burnt Banksy, an anonymous group of “tech and art enthusiasts,” sold a unique NFT consisting of a digital copy of a 2006 Banksy limited-edition print called “Morons.” The group claimed it had destroyed the original print, worth tens of thousands of dollars, in an “art burning ceremony,” shown on YouTube and Twitter. The blockchain-certified “Morons” NFT was all that remained.

Offered on Open Sea, this digital copy of the Banksy sold for about $382,000, more than three times the price that any of the original “Morons” prints have made at auction. The successful bidder was an Open Sea user with the screen name GALAXY, who immediately put the piece up for sale.

Although their popularity has increased in recent months, NFTs are nothing new. In 2017, when the value of cryptocurrencies like Bitcoin and Ethereum first began to climb, there was a speculative craze for Dapper Labs’ CryptoKitties, blockchain-certified images of cats, the rarest of which sold for more than $100,000.

The price of cryptocurrencies collapsed in 2018, and with it the nascent market for NFTs. But now Dapper Labs has recapitalized and collaborated with the National Basketball Association to create N.B.A. Top Shot, a marketplace for digital highlight clips that are the tech equivalent of baseball cards. On Thursday, these had raised $345 million in sales, mostly in the past 30 days, according to Cryptoslam, a site that tracks the prices of NFTs.

Blockchain-certified computer files are also being used to market and monetize an ever-widening range of cultural, commercial and personal items, in what some have likened to a digital gold rush.

Jack Dorsey, the co-founder and chief executive of Twitter, is currently selling his first tweet as an NFT in a timed charity auction. Bidding had reached $2.5 million by Thursday. This month, the virtual sneaker brand RTFKT Studios sold 600 pairs of its NFT products in seven minutes for $3.1 million.

And in the realm of music, where a combination of digitalization and pandemic cancellations has diminished performers’ earning power, NFTs are creating income sources.

The rock band Kings of Leon is set to be the first group to release an album as a series of digital tokens. The album, “When You See Yourself,” will be available starting Friday in three NFT formats, each with extra enhancements, from $50.

In the art world, where the market for NFTs is more established, the current top-sellers are “CryptoPunks,” a cohort of 10,000 individual algorithm-created characters, 9,000 of which were given away in 2017 for trading and collecting on a dedicated Ether platform. Early the next year, the most sought-after “punks” were selling for about $13,500.

On Wednesday, “CryptoPunk 7804” sold for the equivalent of about $7.6 million in Ethereum, a record for any computer-generated artwork, according to Georg Bak, a curator at the Museum of Contemporary Digital Art. The price was five times the previous record for a CryptoPunk, set last month.

John Watkinson, the co-founder of CryptoPunks, said in an interview that he first noticed a resurgence of online interest last spring, during the early days of worldwide coronavirus lockdowns. “There was a showing-off factor,” Watkinson said. “Flashing what you have to other people in a virtual way was the only way to do it.”

According to Watkinson, CryptoPunk collectors were mostly “die-hard crypto fans” and “the crypto-wealthy.” “There are some wealthy individuals in Silicon Valley collecting these now. If you own a rare one of these, it’s meaningful,” he said. It was rumored that “people in the contemporary art space” were also buying CryptoPunks, he added.

Other contemporary art collectors have yet to be convinced.

“I don’t have the right software in my head to understand what’s going on,” Sylvain Levy, who has a large collection of Chinese contemporary art, said of the latest prices for Beeple and CryptoPunks.

“Art is no longer about a relationship with an object. It’s about making money,” he said. “I feel bad for art.”

Being pegged to the price of cryptocurrencies, whose ups and downs resemble the route of a fearsome mountain cycling race, the market for NFT art has a reputation for volatility. But for many in the analogue art trade, the possibility of making significant sums from inventory with no physical presence remains a mesmerizing prospect.

“The potential for it to disrupt the traditional art auction model is humongous,” said Noah Davis, the specialist in charge of the first NFT auction at Christie’s. Beyond the record-setting sale of Beeple’s “Everydays,” he said, NFTs’ “lack of objecthood” meant auction houses faced no costs required for storing, handling cataloging, photographing and insuring a physical work of art, making a “really attractive opportunity” for auction houses.

“Will we be offering more NFT artworks? Definitely,” Davis added. “Does this mean they will replace paintings and sculptures at auction? Absolutely not.”

Was ist The Sandbox (SAND)?