Beyond the bitcoin bubble, the benefits of blockchain

The weeks before Christmas 2017 marked the heyday of bitcoin speculators. Bitcoin futures made their trading debut at two of the world’s leading options exchanges – the Chicago Board Options Exchange (CBOE) and the Chicago Mercantile Exchange (CME) – and prices in the spot and futures market hit an all-time high on 18 December, closing in on USD 20,000. Yet soon thereafter, prices plummeted and never recovered: at approximately USD 10,000 at the end of February, one bitcoin is now worth about half of what it was only two months ago. So is this the end of the hype about bitcoin as the future of global currencies? Probably not yet, since speculation in bitcoin and similar instruments appears set to continue for some time. Yet from our perspective, bitcoin has serious flaws: its trajectory resembles a textbook case of a financial-market bubble, and it is lacking several key qualities that would qualify it as a currency.

The hyperbolic price movements of bitcoin since its early 2009 inception have been very bubble-like in nature. When one compares bitcoin’s five-year price momentum (adjusted for inflation) against that of previous asset bubbles, bitcoin dwarfs the runners-up – the Mississippi bubble of 1720 and the Amsterdam Tulip Mania of 1637. And among more recent examples, bitcoin far surpasses the IT bubble of the 1990s and the Japan bubble of the 1980s.

Compared with other bubbles, bitcoin is almost off the charts Five-year price momentum of bitcoin vs. historic asset bubbles; priced monthly; logarithmic scale 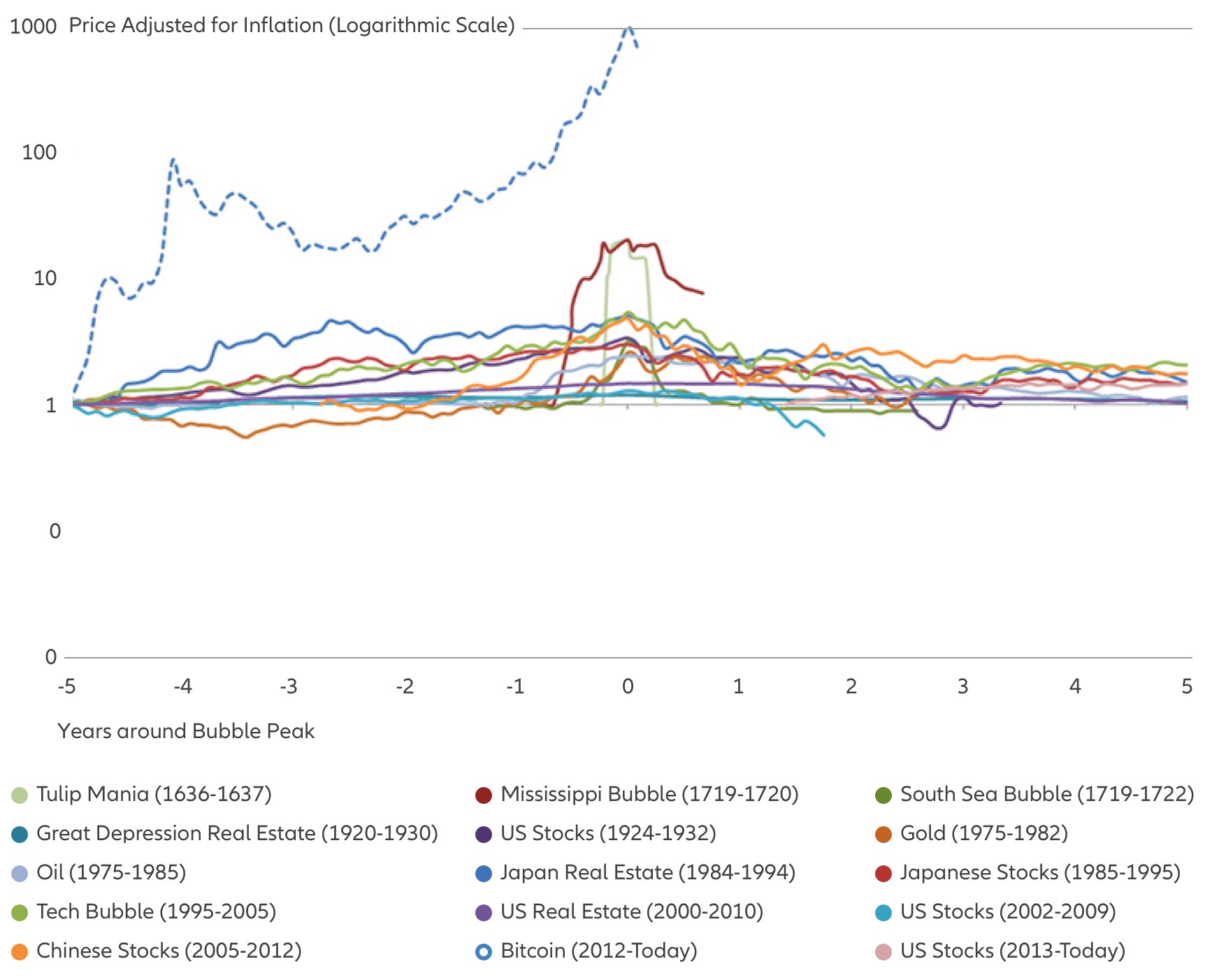 Moreover, bitcoin ticks all of the boxes that we consider to be essential criteria of any asset bubble:

This brings us to a key question: what is the fair value of a bitcoin? In our view, its intrinsic value must be zero: a bitcoin is a claim on nobody – in contrast to, for instance, sovereign bonds, equities or paper money – and it does not generate any income stream. Admittedly, one could make the same argument about gold, but gold has been widely accepted by humankind as a thing of value for more than two-and-a-half thousand years – compared to less than a decade for bitcoin. One could argue that bitcoin’s price developments are indicative of a certain amount of overheating in other asset classes:

Nevertheless, despite the fact that bitcoin is not the only overvalued asset class, it appears to us that bitcoin mania is a textbook-like bubble – and one that is probably just about to burst. So would the end of the bitcoin bubble matter for investors in conventional asset classes, such as fixed income or equities? We don’t believe so. In our view, bitcoin’s demise would have few spillover effects on the “real world”, since the market for this cryptocurrency is still quite small in size. As a result, we believe that the risks to financial stability stemming from bitcoin are negligible – at least as of today.

Not a currency – and not ESG-friendly

So if bitcoin is flawed enough not to be considered a proper asset class, can it at least serve the purpose of being a currency? We believe the answer is no for several reasons:

Moreover, if we consider environmental, social and governance (ESG) factors, bitcoin is certainly not an instrument we favour. The energy consumption related to bitcoin production in a single year is equivalent to the annual energy consumption of Ireland – a worrisome trend that seems to be rising.

Blockchain has its benefits

Despite our concerns about bitcoin, its underlying blockchain (or distributed-ledger) technology clearly has potential merits – not least of which is blockchain’s ability to reduce significantly the costs of verifying transactions and networking. This is prompting a range of financial institutions, including central banks, to explore blockchain more closely and to evaluate practical applications – including conducting financial transactions. It is this aspect of cryptocurrencies in general – and not the specific cryptocurrency du jour – that we as an asset-management firm find to be the most interesting.

Investing involves risk. The value of an investment and the income from it will fluctuate and investors may not get back the principal invested. Past performance is not indicative of future performance. This is a marketing communication. It is for informational purposes only. This document does not constitute investment advice or a recommendation to buy, sell or hold any security and shall not be deemed an offer to sell or a solicitation of an offer to buy any security. The views and opinions expressed herein, which are subject to change without notice, are those of the issuer or its affiliated companies at the time of publication. Certain data used are derived from various sources believed to be reliable, but the accuracy or completeness of the data is not guaranteed and no liability is assumed for any direct or consequential losses arising from their use. The duplication, publication, extraction or transmission of the contents, irrespective of the form, is not permitted. This material has not been reviewed by any regulatory authorities. In mainland China, it is used only as supporting material to the offshore investment products offered by commercial banks under the Qualified Domestic Institutional Investors scheme pursuant to applicable rules and regulations. This document is being distributed by the following Allianz Global Investors companies: Allianz Global Investors U.S. LLC, an investment adviser registered with the U.S. Securities and Exchange Commission; Allianz Global Investors GmbH, an investment company in Germany, authorized by the German Bundesanstalt für Finanzdienstleistungsaufsicht (BaFin); Allianz Global Investors Asia Pacific Ltd., licensed by the Hong Kong Securities and Futures Commission; Allianz Global Investors Singapore Ltd., regulated by the Monetary Authority of Singapore [Company Registration No. 199907169Z]; Allianz Global Investors Japan Co., Ltd., registered in Japan as a Financial Instruments Business Operator [Registered No. The Director of Kanto Local Finance Bureau (Financial Instruments Business Operator), No. 424, Member of Japan Investment Advisers Association and Investment Trust Association, Japan];and Allianz Global Investors Taiwan Ltd., licensed by Financial Supervisory Commission in Taiwan. 439953